Time Price Opportunity or TPO Chart, shows the price distribution during the specified time, thus forming a profile. This allows you to understand at which levels or ranges the price has spent the most time, as well as to determine the main support and resistance levels.

This can be chosen from the Indicators Menu

Price range in which approximately 68% – 70% of the market activity or trading volume took place.

A market in which buyers place bids and sellers enter offers at the same time. A transaction only takes place in the auction market when there is an agreement on price between the buyer and the seller. The transaction typically takes place at the highest price that a buyer is willing to pay and the lowest price that a seller is willing to sell at.

The auction point is located at the first price that is traded above or below the Initial Balance for the day.

A balanced market is a rotational market where prices trade around a fair price.

A Buying Tail is a single print column that appears on the lower portion of a profile structure. The buying tail is usually made up of three or more TPOs. It is formed as a result of aggressive buying activity that takes place once prices drop to a price level that the market participants perceive it as an unfair low for the session. As aggressive buyers jump at these lows, their aggressive buying causes prices to quickly move higher towards value.

A column is term that is sometimes used to describe a series of consecutive vertical TPO prints on a profile chart. A split profile is typically made up of a number of different columns. Each TPO column on the profile chart will be for a specific time period, it will have a price high, a price low, an open price and a closing price.

A composite profile is a profile that consists of two or more profiles.

As the market activity moves up and down within a specific range of prices during the auction market process, this activity results in a developing range of prices for the session. The range continues to develop until the market finds a fair price and begins to distribute and create a value area around that fair price.

A dynamic day describes a trading day during which the high or the low of the day’s range are both revisited by market activity during the day.

The ease of movement describes the ease by which price goes up or down during a directional move in the market.

A failed range extension results when prices fail to break the range created during the initial balance.Imbalanced Market
An imbalanced market is a market where prices are moving directionally seeking a fair price for a balanced market.

An inside day is a trading day where all of the trading activity for the entire day takes place inside the price range of the prior trading day. It is a day of uncertainty in the market.

A naked POC is a point of control from a previous session’s profile that has not yet traded in subsequent profiles. The naked POC can be used as a useful reference point “support/resistance”.

A Neutral Day describes a profile structurefor a tradingday with limited range extensions on both sides of the initial balance. Neutral days are formed as a result of market uncertainty and lack of directional conviction.

A Normal Day is a term used to describe a profile structure that is characterized by a wide ranging initial balance, the first two time periods of the day create a wide range. As activity develops for the day, the distribution will generally develop within the range of the initial balance. As long as there is no long term aggressive market participation, range extensions will be limited. That is to say that the market may extend beyond the initial balance by only a small amount to the top or bottom of value, and then return back into the value area. Some normal day structures will not have any range extensions at all.

An open drive describes an event that takes place when the market opens the trading day with a strong directional drive. Prices will open and continue to move in one direction without ever breaking the open price. This usually occurs when there are aggressive and determined buyers or sellers in the marketplace.

The opening range is the immediate range that is created during the first 5 or 10 minutes of activity for the day. It is always contained within the range of the day’s initial balance.

An open test drive occurs at the open for the day when prices move towards a direction to test a key support or resistance level.

When prices move for the first time into a new price area where it had not previously traded during the current trading session, this initial activity is described as the pioneer range.

Stong forms of resistance and support formed by POCs filtered by entering the minimum number of TPOs a POC must constiture to form a PPOC. They are shown as horizontal lines with a thickness of 2px

A range extension occurs when price activity expands and extends beyond a previously defined range.

The lowest price point on a specific range of price activity.

The highest price level reached during a specific range of price activity.

A single print is a series of TPO prints that appear on a profile chart without any activity preceding or following it. Single prints may appear on the top or low end of a profile chart as well as in the middle of a profile structure. A single print is a portion on a profile chart that usually represents an area of fast market activity. Price is not in balance in these areas and they are often referenced as points to look at for potential support or resistance. Singles or single prints of the profile are placed in the middle of a profile structure, not at the upper or lower edge. They occur on impulse movements and are used as support/resistance zones, which the price can test in the near future. The singles line indicates where the singles begin to form (in cases when there are several single prints).

A Selling Tail is a single print column that appears at the top of a profile structure. The selling tail is usually made up of three or more TPOs. It is formed as a result of aggressive selling activity that takes place once prices rise to a price level that the market participants perceive as an unfair high for the session. As aggressive sellers react to these high price levels, their aggressive selling cause’s prices to quickly drop lower.

The TPO count is the total number of TPO prints or letters that are printed on a profile chart for a given period or session. The larger the TPO count on the profile chart, the greater the activity for the session.

The term trend day is used to describe a profile chart with a strong directional movement. Typically a directional day is characterized by a narrow profile structure that continues to extend the price range in the direction of the trend for the day.

An unfair high price is a price level that is above current value for a session and is recognized by the long term market participants as an attractive selling point. Unfair high market prices attract responsive sellers.

An unfair low price is a price that is below current value for a session and is recognized by the long term market participants as an attractive buying point. Unfair low market prices attract responsive buyers.

The value area on a profile chart is typically calculated by tracking the number of TPOs on the Profile for a given session, and then identifying or highlighting the range of prices that included approx 70% of the trading activity or TPOs on the chart. This identified price range represents the value area for the session’s profile chart.   The upper price of this Value Area is considered the Value Area High (VAH). The lower price of the VA is considered the Value Area Low (VAL).

A volume distribution shows the various levels of traded volume at each price within the price range for the session. It is often displayed as a histogram on the side of a profile chart.

Once a value area is calculated and identified on a profile chart, the upper price of this Value Area is considered the Value Area High (VAH).

Once a value area is calculated and identified on a profile chart, the lowest price level of this Value Area is considered the Value Area Low (VAL).

The volume value area is the price range for a session that includes 70 % of the traded volume for that session. GoCharting allows you to alter the VA % per your convenience

The settings of the Volume Profile vary depending on whether the underlying data is Candle Data or Tick Data.

The remaining settings are specific to the indicator. To open the Settings, click on the gear icon in the Chart Tooltip/Legend

How to merge profiles together? #

Multi-Day Profiles
A multi day profile is a profile chart that consists of a specific number of days/sessions that are combined into a single profile.

Profiles can be merged using the Market Profile Drawing tool under Drawing Menu. We repeat Drawing Tool and NOT Indicator

How to split the profiles #

Split ProfileA split profile is a profile chart that is split into separate columns or periods. This makes it possible to clearly see the range of prices traded for each letter column.

TPO stands for Time Price Opportunity. It is basically the height of each of the tetris like boxes (in terms of price) in a Market Profile Chart.

In traditional softwares, the trader is asked to enter a TPO value of his/her choice which can be tricky for beginners. Hence, we designed an algorithm that will do this for you

Auto TPO is a value of TPO that the algorithm decides based on your montior dimensions and volatility of the underlying symbol making it possible for you to view the letters and boxes clearly. The advantage is that you do not have to adjust the TPO for every symbol or timeframe – it will adjust on its own. However, it has some disadvantages in terms of reduced levels of precisions ar time. The algorithm uses some form of approximation which can never be as accurate as a manul value of TPO entered by the trader.

What is Poor High/Low #

Poor low and Poor High are market profile structure which generally indicates a market that is too long or too short and the shorter timeframe players in the market has low confidence about the current market direction and takes control of market to move it in opposite direction. Generally happens when the market is continuing its trend in one direction and the momentum of the trend starts loosing at the peaks which makes the shorter timeframe traders to think that market is toolong/short.  Generally market trends ends at the peak with an excess or a tail. But if the exhaustion takes place due to lack of momentum at high or lows with lack of excess then such auction is referred as poor low or poor high. 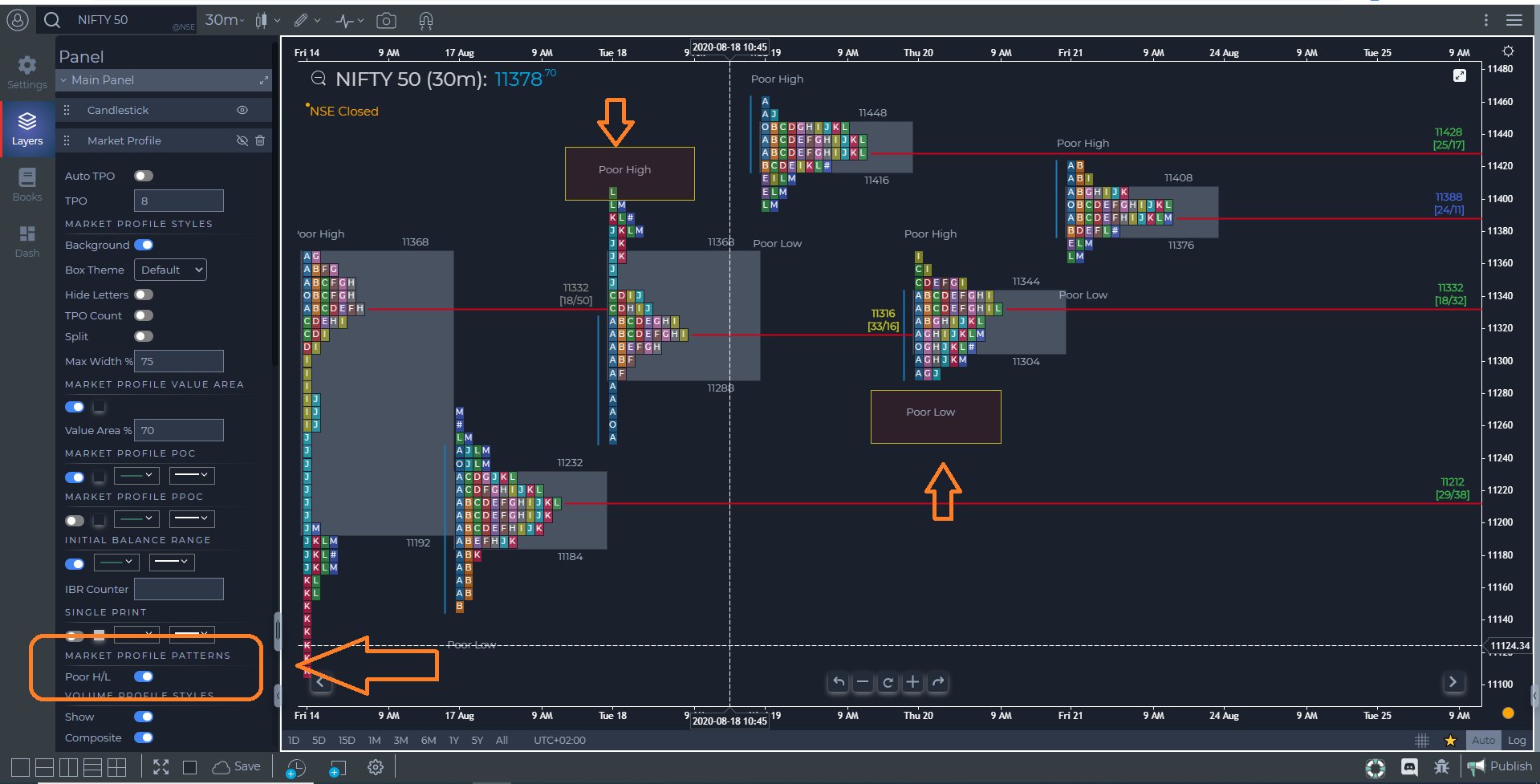 It generally follows the below patterns

What is Single Print and how to see in GoCharting #

To activate, toggle the Single Print switch and customize the style and color

What do these numbers in brackets mean? #

How to move the TPO profiles behind the price candles #

Still stuck? How can we help?

How can we help?